Camels for Abraham, or Truth and Fact in the Bible 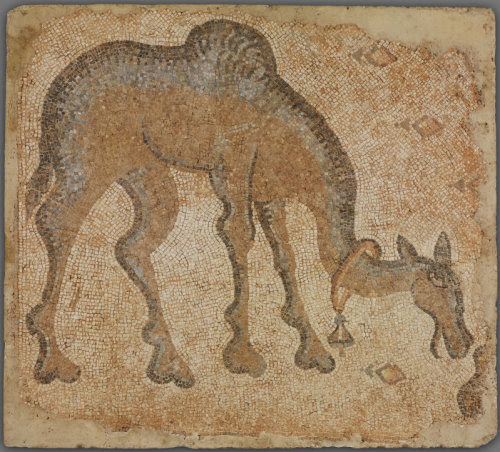 The Bible begins, in the Book Genesis, with a set of stories that have a universal if certainly mythic character - Adam and Eve, Cain and Abel, Noah and the Ark, the Tower of Babel. But in Gen 12 a somewhat different sort of story begins - not a universal but a specific story, about the forebears of Israel and the Jewish people.

A certain “Abram” is called by God to leave his home in what is now Iraq and journey with family, retainers, and herds of camels and sheep to an unknown land of promise. Along the way, he encounters God a number of times, his name is changed to “Abraham", he adopts the rite of male circumcision as a sign of his faith, and he acquires descendants who we are told came to include not only the Jews but Arabs and other Middle-Eastern peoples.

Abraham was actually in the news last month because of the publication of a new study from Israeli archaeologists about camels. While the Genesis story refers to Abraham as having camels, and the implied chronology of Genesis places Abraham sometime between 2000 and 1500 BCE, the witness of carbon dated evidence published by Dr. Erez Ben-Yosef and Dr. Lidar Sapir-Hen of Tel Aviv University's Department of Archaeology and Near Eastern Cultures suggests domesticated camels only got to his part of the world in more like 1000 BCE, half a millennium later. The story did not add up.

There was a forceful but predictable backlash on the internet. All sorts of people, most rather less qualified than Drs Ben-Yosef and Sapir-Hen, offered their firm opinions about ancient camels; some observed that there could still be older camel bones waiting to be discovered, which is of course true. But none of this reaction was really about camels, and little of it was even about Abraham; it was about the Bible, what it is and what it means.

In our time it is difficult to maintain the middle ground between forms of scepticism that dismiss the value of biblical literature out of hand, and of fundamentalism which insists on the literal accuracy even of stories that historians, let alone physical scientists, would not defend in such terms.

In fact biblical scholars - most of them people of faith - have quietly acknowledged for over a century that there are elements of the biblical stories of Abraham and his offspring  - and not just those possibly anachronistic camels - which seem more at home in later centuries than those they are supposed to be set in. But the stories of Abraham are not journalistic or eye-witness accounts of ancient events, even though they do have a relationship with history; rather they have been shaped by telling and re-telling, formed for the readers and hearers, both in oral tradition and then in varied literary sources underlying the present text of the Pentateuch. The truth we are offered in them is not always the truth of fact, but often the truth of value, meaning, and purpose. Abraham’s story is one of trust, and of hope - not primarily of camels.

Ironically the most prominent proponents of both sides of that debate have far more in common than they realize; they have both accepted the dubious premise that truth and facticity are the same thing. The sceptic must dismiss Abraham, and the Bible with him, because he does not have camels; the fundamentalist must find camels for Abraham (as well as an ark for Noah and various other dubious pseudo-historical accoutrements) lest the Bible be untrue; both are so worried about whether or not these camels are facts, that little or no attention is given to what they - or more to the point Abraham - might mean.

Many of us who study these documents as both history and poetry would say something like this: The Bible is true - and some of it happened. For truth and reality take forms beyond the narrowly historical and the strictly material, although they include it.

The apostle Paul’s letter to the Romans reflects the interest of the new Christian movement, which had already spilled beyond the peoples who claimed physical descent from Abraham, in that already-distant ancestral figure. Paul claims (Rom 4) that Abraham is relevant to his readers as a model of faith, rather than as a literal ancestor. Not only Jews (and Arabs) who adopt circumcision and the Law of Moses, but Greeks and Romans too can be Abraham’s spiritual descendants.

This claim offers an interesting hint about reading the Abraham narrative itself, and the Bible. Descent from Abraham, Paul says, is not about the fact of literal ancestry or inheritance but about faith. What is significant about Abraham is that he was called, and that he went; not because of the evidence, we might add, but despite it. Those who follow are the true descendants of Abraham.

But the evidence is ultimately important too of course. The whole of the story that follows, of promised land, suffering and redemption, of Moses and Miriam, or Mary and Jesus, of Paul and (if it is our story too) of us, depends on that ancient and mysterious “yes” about which, historically speaking, we can be sure of little more than that it happened. And yet it did.

Abraham’s is a good story with which to start the journey of our own academic year. In it we will be challenged to pursue truth in all its forms. Some of these forms will even involve facts. May we go forward, with discerning and enquiring minds, and like Abraham also with courage, and with hope.