Atonement as Paschal Victory: Sacrifice in Athanasius of Alexandria 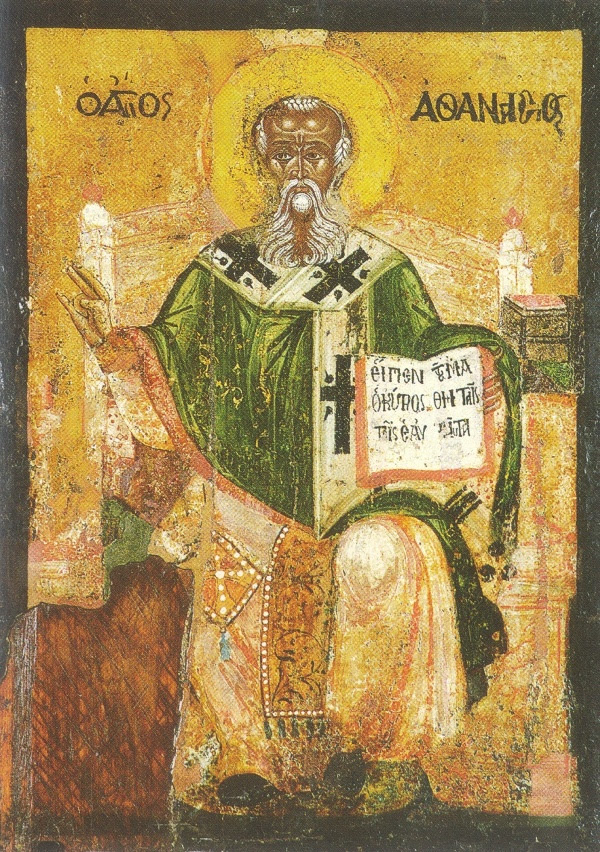 The long life of Athanasius of Alexandria (c.296-373) spanned a period of real change in experience and practice of sacrifice. Growing up before Constantine's promotion of Christianity as a quasi-state cult, and through the last great period of persecution under Diocletian, he lived to see the the sacrifices of traditional Greek and Roman religion decline into relative disuse as Christianity itself grew.

Sacrifice was therefore not merely an idea to play with, but an area of dispute and contest. While Athanasius uses cultic language to explore aspects of Christian belief and practice, he also uses it as a means of dispute with Judaism (whose offerings he sees as redundant "types" of Christian ones) and Greco-Egyptian religion (whose sacrifices he rejects as demonic).

In using sacrificial ideas and images to discuss Christian theology and ritual, Athanasius does not work with one single idea of sacrifice, since the world he inhabited and the biblical text he used reflected various offerings, with different purposes attached. On the other hand, he and other ancient authors are arguably in the process of developing such a single notion, pointing to an archetypal priest and offering of which the others are images (or imitations).

Athanasius speaks freely of the Christ-event as a sacrifice; indeed at times “sacrifice” seems for him to be a way of alluding to the work of Christ in general:


The Word himself assumed a human body, in order that He might offer it in sacrifice for other similar bodies: “Forasmuch then as the children are the sharers in blood and flesh, He also Himself in like manner partook of the same, that through death He might bring to naught Him that had the power of death, that is, the devil; and might deliver them who, through fear of death, were all their lifetime subject to bondage.” For by the sacrifice of His own body, He both put an end to the law which was against us, and made a new beginning of life for us, by the hope of resurrection which He has given us (De Incarn. 10, ANF revised)

In this case Athanasius does not develop any specifically cultic aspect of Jesus’ death, but uses “sacrifice” to refer to his death and gift of self, and what is emphasized (as in Hebrews, which he cites here) is the solidarity involved in his being a human offered for humans—which is in fact not a typical element of sacrificial cultus at all. There is certainly an element to this logic that can be regarded as “substitutionary”, but as George Dragas points out, it is not forensic or merely a “swap” ; his humanity actually represents and encompasses our own. That work, De Incarnatione, is deeply concerned with the mystery of salvation, but conceives of the problem and solution as related to the corruption of the divine image in humanity; salvation is achieved by its restoration in Christ, and this is what any “sacrifice” must achieve.

The Festal Letters tend to reflect more specifically on the Paschal aspect of Christ’s death and resurrection, not merely assimilating it to a broader sense of “sacrifice” or to expiation, but drawing out the character of the Passover as victory over sin, the devil, and death, and the historic events of the Exodus as a type:


Now, however, that the devil, that tyrant against the whole world, is slain, we do not approach a temporal feast, my beloved, but an eternal and heavenly. Not in shadows do we show it forth, but we come to it in truth. For they being filled with the flesh of a dumb lamb, accomplished the feast, and having anointed their door-posts with the blood, implored aid against the destroyer. But now we, eating of the Word of the Father, and having the lintels of our hearts sealed with the blood of the New Covenant, acknowledge the grace given us from the Saviour (Festal Letter 4.3, ANF revised)

Athanasius uses the motif of blood on the doorposts to cast the sacrifice of the Passover as one of “aversion”, as Frances Young puts it. The necessity of Jesus’ sacrifice is to combat evil.

In the sixth Festal Letter, Athanasius explores the (near-)sacrifice of Isaac by Abraham, which does not have a particularly Paschal character, and finds in it a significance that is salvific and perhaps expiatory, but certainly also therapeutic:


The patriarch was tried, through Isaac, not however that he was sacrificed, but He who was pointed out in Isaiah; ‘He shall be led as a lamb to the slaughter, and as a sheep before her shearers he shall be speechless;’ but He took away the sin of the world…. For the sacrifice was not properly the setting to rights of Isaac, but of Abraham who also offered, and by that was tried. Thus God accepted the will of the offerer, but prevented that which was offered from being sacrificed. For the death of Isaac did not procure freedom to the world, but that of our Saviour alone, by whose stripes we all are healed. For He raised up the falling, healed the sick, satisfied those who were hungry, and filled the poor, and, what is more wonderful, raised us all from the dead; having abolished death, He has brought us from affliction and sighing to the rest and gladness of this feast, a joy which reaches even to heaven (6.8-9)

This sacrifice is offered to God, although Athanasius tends to work out the logic of the Passover itself in terms of an offering to death, or the devil.

Athanasius therefore works largely within what has been called the “classical” view of the atonement, and illustrates how this might be possible while using sacrificial ideas and images from the Bible quite fully; in part this depends on the varied character of cultus itself. The emphasis given to the Paschal character of the atonement is also important here, and is biblical but also doxological in character. Since the celebration of a reinterpreted Pascha had been experientially central to Christian life from the outset, Easter itself was a sort of liturgical “canon within the Canon” (and indeed "before the Canon"), that served as a touchstone for Athanasius' and much other early Christian thought, not least about the atonement.