Go Away: Apostolic Ministry, Inclusion, and the Future of the Episcopal Church

[Sermon from the ordination and consecration of Mark Edington as Bishop of the Convocation of Episcopal Churches in Europe, Cathedral of the Holy Trinity, Paris, April 6 2019] 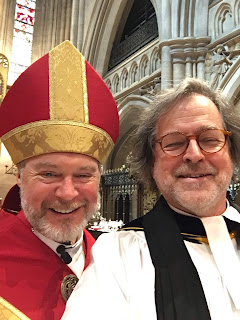 "The harvest is plentiful, but the laborers are few; therefore ask the Lord of the harvest to send out laborers into his harvest. Go on your way."

Mark, those of us who have known you for some time are not exactly reeling in shock that you’re being made a bishop. If you had told us however that this would be happening in Paris, you might have encountered a bit more scepticism.

Looking out here today, and even across Episcopalian Facebook, it seems as though all America has come to Paris on pilgrimage - but so too of course have your new sisters and brothers in ministry from Italy, Germany, Belgium, Switzerland. Most of us in any case took journeys to be here, as those worshipping in this space always have; it has always been a home to the stranger and sojourner.

When America comes to Paris, it finds not only bread actually worth eating and other enviable food and art, but institutions that reflect a long and warm relationship of secular as well as sacred pilgrimage between these two countries: Harry’s New York Bar, an American Hospital, an American Library, and so yes, even an American Cathedral.

This one may be more and more the strangest of those expatriate outposts; the strangeness of an American Cathedral in Paris today is not only, or not so much, its presence among the outposts for one nation or culture in a foreign land, but the sheer audacity of the public witness of faith in what has been claimed by some measures as the most secular society of the West. According to a 2016 survey [from Institut Montaigne,] 39.6% of the French claimed no religion. France is at the forefront of western secularism; and it is probably a trend-setter, not an outlier.

So welcome, Mark and friends, to the future of the West. Secularization is as real as anthropogenic climate change, and it is rolling across the Atlantic like a tsunami. This place is not best understood as an outpost against it, but a witness within it; not only can we not import America's religiosity to Europe, Europe’s secularism looks to be the shape of things to come for all of us.

Christendom is over in some places, and on its deathbed in others. And to be brutally frank, our ecclesial responses to that change so far may, with honorable exceptions, rival those of American policy-makers to global warming. Denial always seems like a great planning tool until it is too late. Yet despite the beauty of these stones and the powerful witness of which they and their inhabitants will yet prove capable by the grace of God, there is a sense we are actually living among the ruins now.

Let me quickly say that this is not all bad news. Christendom - that easy assumption that the external trappings and some other elements of Christian faith were part and parcel of the life of the West - is over. But the Jesus Movement is not over, the Way of Love is not over - and even the Church is far from done.

The Gospel today centers on a fundamental part of Christian identity that has been strangely neglected. “Go,” Jesus says. “Go away,” even. There is something essential to being Church about itinerancy. Christians are pilgrims, not colonists. “Here," the Letter to the Hebrews says, "we have no lasting city, for we seek the city that is to come.” If Christendom is dead, then pilgrimage, itinerancy, is what we have now - and of course what Episcopal Churches in Europe have always had.

For the Christian there must be a hint of excitement in itinerancy, of promise, of a memory often left to languish but which may now come flooding back, to tell us these are not times of despair but times of hope. But this is our core identity, Jesus reminds us: "The harvest is plentiful, but the laborers are few; therefore ask the Lord of the harvest to send out laborers into his harvest. Go on your way.”

We as Episcopalians are proud of our tradition of inclusion and witness to justice; but we sometimes have a way of making these things about ourselves. What if the most “inclusive” words in the Gospel were actually not “come in”, which assumes our privilege is to be shared, or "The Episcopal Church Welcomes You," but, as Jesus has a way of saying, “go,” or even “go away,” as he says to these curious and ill-equipped disciples as we heard in our Gospel today - which, like most translations, tries to soften the literal meaning of the command, which really is “go away.” “Go away,” as the risen Christ says in the same words to the awestruck and only slightly better equipped apostles at the end of Matthew’s Gospel, leading to that pilgrimage that becomes Church; “go away” and make disciples of all nations. That is what inclusion looks like; not the invitation into our tiring organizations for their sake, but the recognition that it is God who has already included us all in Christ, who calls us to look out rather than in, and thus sends us. “Go away.”

Mark, this is the time for you and all of us to take up our belongings and ask where we may now be led. This is the ministry of a bishop in the Church in 2019 and beyond. This community of Churches has been practicing itinerancy for many decades, in ways that the rest of us need to regard not as a curious appendage for the Episcopal Church, nor a convenient extension of American life for the Episcopalian on the Grand Tour, but as something that speaks to the heart of Christian identity. The wonderfully different character of the Convocation, whose life has always been that of a pilgrim people, may therefore have a lesson built into its being for the rest of The Episcopal Church. Welcome to the future, America. At least we know the bread will be good.

A bishop, Mark, must now be one who clams her or his role as chief pilgrim and chief evangelist; one who hears the command to go, and leads the way. There are many stories in scripture, and part of the wisdom required for interpretation is knowing which ones are for the times. This is not a time for Solomonic edifices, but for Mosaic tabernacles, for tents rather than temples, a Church fit for a people of God whose most basic vocation may be to understand that they are on the move, and going somewhere with a purpose. And a bishop for these times will be less a Solomon putting stones one on the other, and more Moses or Miriam, rejoicing in God’s fiery cloudy pillar leading us, even singing and dancing before the people, into the promised future.

So Mark - and in the words of a mutual friend, “with this I will sit down, because we gotta get you consecrated” – so Mark, welcome, and "go away." Go away, not because we are pessimistic, but because we are hopeful, not because we think God has abandoned us, but because we know God will lead us. And let the measure of your ministry Mark, and that of this Convocation be that, as Jesus said to the apostles when sending them out, more and more people across these lands will truly know that the kingdom of God has come near.

"The harvest is plentiful, but the laborers are few; therefore ask the Lord of the harvest to send out laborers into his harvest. Go on your way."