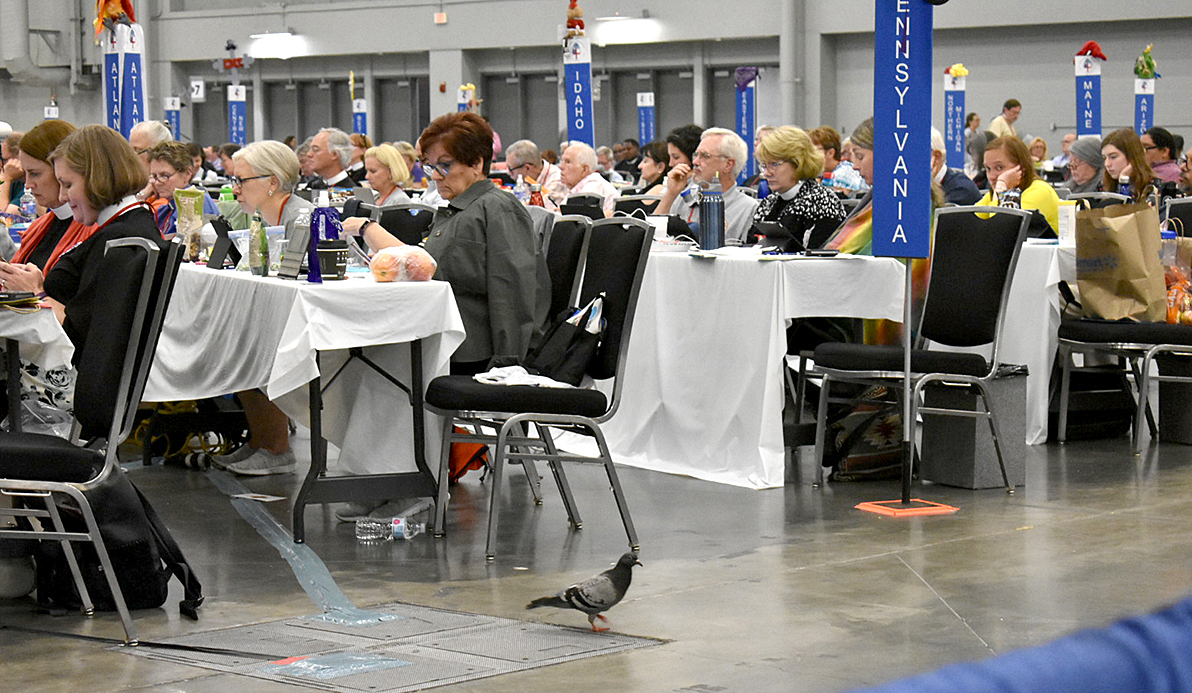 Half-way through the 79th General Convention, Prayer Book revision seems likely. While the Bishops may have their own different thoughts, it seems probable that the Church will gird its loins and face some version of a long and challenging process of trial use and preparation for reform.

There is a curious introspection about much of the conversation so far. Whatever our positions on the different rites, existing and envisaged, the driving concerns seem focussed on the sensibilities and characteristics of Episcopalians themselves - “our" diversity, our commitments, our needs.

Liturgy however is an ecumenical and a cross-cultural business, not a merely denominational or national one. The drafters of the 1979 Book knew this, certainly. Many current deputies and other Episcopalians who were once members of other Churches may take for granted the ease with which someone formed in the Roman Catholic Church, or in a set of denominations just to the Protestant side of us on the spectrum, can slide into the prayer of the 1979 Book. It’s no accident; the current Book of Common Prayer is the product of about one hundred years of ecumenical scholarly convergence that shaped the liturgies of all those Churches. This would not have been the case with the 1928 Book. We didn’t get where we are alone.

It is worrisome that despite the soaring temperatures of Austin, the current Prayer Book conversations take place in an ecumenical winter. There are numerous important reasons that things have changed in our dialogues with other groups since the 1960s and 70s, but a profound question remains largely untouched in this debate: how will our liturgy reveal and help create the unity of the Body of Christ, whose relationship with the Episcopal Church is, well, inexact and incomplete?

This shouldn't mean we just borrow the insights of other traditions as ritual toys. One of the faintly tragic elements on display of the 1979 Book are the numerous borrowings from Orthodox liturgy, which reflect not just scholarly knowledge, but prayerful conversations with Russian and Greek scholars of the mid-twentieth century who were then genuine dialogue partners. It is hard to find such engagement with eastern Christianity in TEC now, beyond the somewhat hollow testimony of facsimile icons in Church bookstores.

Adequate worship can never be adequate worship just for us, however we conceive of ourselves. It’s not the nature of the Christian Church to retreat into agreeable enclaves where our differences can be avoided or even celebrated by giving us only the prayers we like. Liturgy ought at least to rub our noses in the scandal of disunity, not reinforce it.

Prayer Books have, of course, been revised and even just written from scratch before. History suggests however there are some conditions for success. This process has always involved scholarly as well as faithful and prayerful people. Given our history, in the past this basically meant white men. There is no way that can continue in a future process of revision. However that doesn’t mean that any Commission will be made adequate to the task with a diverse group from within our own constituencies, or even reflect those constituencies’ opinions accurately. Unless there is some deep recognition of the place expertise and scholarship plays, not in determining every outcome but in shaping the questions, we will fail.

So we can’t solve all the problems or grasp all the opportunities of liturgical revision just by looking inwardly. We might need people of color (in particular) as expert consultants who are not Episcopalians at all, but Anglicans from elsewhere, as well as Roman Catholic, and Protestant, and even Pentecostal scholars who have reflected on their own and other traditions profoundly. Yet we can’t be satisfied with borrowed insights - these have to be based on real relationships, not just the appropriation of attractive elements.

We also need to pay closer attention to how liturgical renewal has rolled out in other parts of the Anglican Communion in particular. It seems to have escaped notice in much of TEC that there is no other Church so confident as this one that a single book can actually do the work being planned for it in some imaginations. Elsewhere, expansive and dynamic bodies of authorized texts, that refer back to a historically-normative book, is far more the rule.

This issue will actually rear its head in that part of the TEC conversation that focusses on translation. There seems - properly - to be strong support for new translations of the BCP that are less wooden and allow for idiom and image that will work in the different cultural contexts of Spanish-speaking and other worshipping communities. Yet this actually means multiple liturgies and multiple books, in practice. So in the end we will not be able to face the challenge of diversity just by adding more pages to the Book - let alone by cutting out the pages at which we tend to sneer, but which are the heart of others’ communal prayer. Something bigger than mere revision is needed.

Given the length of time involved, all this work will be for for the worshipping lives of an as-yet hypothetical next generation of imagined Churchgoers (or Jesus followers).  Yet the young people as well as the more diverse congregations of these conversations may so far be constructs suiting our various imaginings about what and who we would like to follow us. Will we allow actual young Christians - as opposed to imagined ones - to play the key roles in what comes next? Will we allow a Prayer Book revision process to be driven by the sensibilities of a graying Church, however progressive, when a rising generation may have its own things to say?

Last but hardly least, this is a God thing, and a Bible thing. Liturgy is our attempt to serve the living God, not to suit ourselves. The greatest claim of Anglican liturgy is not its esthetic beauty but its scriptural heart. This recognition doesn’t answer the questions that face us, but it does change them. The challenge of arbitrating between different opinions about worship in Anglicanism as as old as the introductory essay to the first BCP, of 1549. There, as Cranmer and others negotiated a path between conservative and progressive tendencies, he offered a pithy guide to Prayer Book revision:  “it was thought expedient not so much to have respect how to please and satisfy either of these parties, as how to please God, and profit them both."