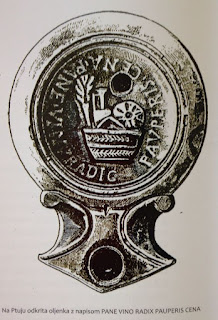 A recent article from David Bentley Hart gives a powerful account of the Lord's Prayer as a prayer by and for the poor. Hart focusses on debt, drawing on David Graeber's book of the same name which I have also found important.

The line that has had me thinking most recently is that about bread (which won't surprise regular readers!):

The actual meaning of this simple statement is famously obscure, because of the unusual Greek word “epiousios”—translated “daily” in most settings— and which has often been interpreted eucharistically. This is simultaneously right and wrong, because while the theology attributed to the text by various early interpreters and onward - something like "let us have the sacrament of the Eucharist daily"- is historically implausible, I think it is inevitable that the prayer will have been interpreted in some degree of relationship with actual eucharistic eating from the earliest times.

The first Christians and their neighbors lived in a society where bread was the staple food. It wasn't a side-dish but the center of the average meal. Yet many people lived in a state of food insecurity, or what Classicist Peter Garnsey calls "temporary poverty." More than half of incomes went on food. For city dwellers it was common to seek invitations to dine from wealthier patrons, or to rely on free or subsidized bread or grain when it was available. The "daily" reality was not just an existential question - it was a very practical one. Many needed to find their bread on a daily basis.

Ulrich Luz and others argue, and I follow them here, that the derivation of epiousios in the Lord's Prayer is most likely to be from the Greek epienai for “that which comes”; the more accurate translation might then be “give us today our bread for tomorrow.” This means, then, something like a prayer for food security; not just the daily bread of the dole, or the patron’s sought-after but humiliating dinner or food parcel which are inevitably for today, but the promise that tomorrow’s needs are also looked after, which implies an end to such dependence.

This means that God becomes the true patron, and the one praying is saying something akin to “your kingdom come” earlier in the prayer, where current, unreliable, and indeed oppressive forms of human patronage are swept away by the reign of God, and by God’s bread.

In any event, it is important to understand that this petition does not avoid asking the simplest question about basic human need. We need not refuse more elaborate or secondary interpretations, including those that connect with our eucharistic eating, but they are just that, secondary. Bread does not “stand” for anything else here; the ancient hearer, pray-er or reader could not have interpreted it any other way.

[From the lecture "‘The First-Fruits of God’s Creatures’: Bread, Eucharist, and the Ancient Economy," given at the Institute of Sacred Music's "Full of Your Glory" conference at Yale, June 18 2018].