A Saint, His Cloak, and Us 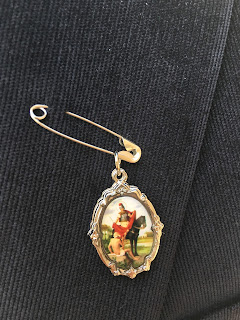 St Martin’s Day falls on November 11th. Coming at the end of autumn, Martinmas was a traditional time in Europe for agricultural festivals, for testing the new wine vintage, and for the slaughter of geese, cattle, and, in Spain, of hogs. The saying “A cada cerdo le llega su San Martín” (every hog will get his Martinmas) reflects this custom as it offers a fateful warning to the proud and the greedy.

Many also know November 11th as Veterans’ Day, or Armistice Day. As the end of the Great War approached late in 1918, the choice of Martinmas as the date for signing the armistice was profound. France, where so much of the slaughter of a dubious war had taken place, celebrated peace under the patronage of one of its greatest and oldest saints, himself a soldier who had laid down his arms and embraced peace.

Last year Martinmas fell just after a momentous election. In St Luke’s Chapel at the Berkeley Center I listened on November 11, as we often do there on such days, to a summary of the saint’s life read before Morning Prayer.

Martin of Tours was born around 336 in what is now Hungary, then the Roman province of Pannonia, and was brought up in Pavia in northern Italy, where he became a catechumen. He joined the army and served in Gaul (now France). The most famous story about Martin comes from this period of his life: as he was approaching the gates of Amiens, he met a beggar and was moved to cut his cloak in half to share it with the poor man. That night, Martin dreamed of Jesus wearing the portion of the cloak he had given away, and heard him say to the angels: "Martin, who is still only a catechumen, clothed me with this robe.”

Martin was baptized, but felt that his Christian calling required leaving the army. "I am a soldier of Christ” his biographer Sulpicius Severus records him saying; "I cannot fight.” Martin pursued the vocation of a hermit for some years until he was called, against his will, to be bishop of Tours.

One story of particular interest reflects Martin's position on how Church was being drawn into a closer relationship with the state and its exercise of power. A Christian teacher named Priscillian, bishop of Avila in Spain, was accused of heresy; some of Martin’s episcopal colleagues were happy to use imperial power to try and to execute Priscillian, but Martin objected vehemently - despite also condemning Priscillian’s teaching - and even excommunicated the bishops who had compromised with the authorities and murdered their brother.

As a scholar of the ancient Church, all this was familiar to me but took on a fresh power as I was reminded of the story and the man that day. So what did this have to do with what Christians are supposed to do after November 9th 2016?

It is often said that Christendom has ended, and that the Church should reject compromise with Empire - but many Christians of both liberal and conservative persuasions have continued to act, throughout this election and its aftermath, as though American civil religion were the center of our real allegiance.

Though not a US citizen, I shared the surprise and, to be frank, dismay of many colleagues at Yale and across the country at the election of a reality TV star uniquely unqualified to lead the world’s most powerful nation. Yet while the characters of Barack Obama and of Hilary Clinton might have been more appealing to most, and while there are significant differences between party platforms, there should have been little temptation to baptize either party's agenda.

America may have a new and acute kind of problem with its current president, but its chronic problems of injustice are rooted in assumptions shared by both major parties, and a system on which they depend. Inequality - to take one most fundamental measure of a just society - was actually worsening under Obama’s presidency, as previously. Research published between the election and the inauguration in 2017 reveals that while in 1980 the top 1% of adults in the US earned on average 27 times more than bottom 50% adults; the same group earns 81 times more than the lower half today. This is what economic success looks like to most Americans, and many less well-off Americans voted accordingly (although misled, I suspect, as to what was on offer).

Given that neo-liberalism yoked to Democratic leadership has led to such results, it is hard to see how choosing between the two versions of the current political establishment could really have been a first-order issue for those seeking social change, even if specific threats associated with Trump deserved to be named and opposed, and still do.

Many Christians have admirably taken part in protests since the election such as the Women’s March, and made public their support for migrants. These are important, even necessary, for us as people called to act justly and support the oppressed. Yet formal or institutional Christian responses to the election, and the controversies they have engendered, have been curious. Episcopalians - my own tradition - debated the decision to hold a prayer service for the President’s inauguration at the Washington National Cathedral, itself an Episcopal church. Both sides in arguments about liturgizing the presidency seem have to have presumed that faith communities function as adjuncts to the American project, even they contest its specifics. Some, in other words, would have been happy to have a prayer service for Hilary Clinton, while being angered at the fact of one for Donald Trump. A service held in conjunction with Barack Obama’s 2009 inauguration featured prayers mashing his campaign rhetoric, Lincoln’s second inaugural, and biblical texts together. This makes no more sense than supporting Trump. Praying for enemies, however, is a biblical imperative.

One of the unlikely and unwelcome gifts of the Trump ascendancy should then be the deeper realization that such buttressing of civil religion, even where it bears attractive policies and personalities, is a dead end for the Churches and has long been so. This does not mean that Christians should hold back from political action or advocacy; it does mean rethinking alliances and assumptions, and it does mean re-focussing on what the distinctive aspect of a Christian politics would be.

This is where the example of Martin seemed to speak powerfully to the situation after the election, and now. Martin was a Christian, and a leader of Christians, who was deeply concerned both with justice and with power. He had to negotiate changing realities around him regarding the relationship between Church and state, and to consider what the integrity of Christian faith demanded or allowed. His situation involved an emerging Christian ascendancy, ours a well-advanced decline. Despite the differences, there are clear lessons to be learned, and I think an example to follow too.

Martin did not think military service and Christian witness were compatible. I offer no condemnation of Christians in the services, but suggest this example shines a harsh light on false reverence for national institutions, as well as on the specifics of sanctioned violence. The decisions necessary to defend the state may be real, but they are not ours to make as leaders of faith communities. Our challenge is not to pretend that the opinions of bishops or pastors matter any more than those of anyone else, but to “work out our salvation in fear and trembling" and assist others in doing the same. Faith demands its own allegiance.

The famous story of Martin and the beggar places immediate engagement with the marginalized as its heart. We cannot afford to place our hope for justice on policy or voting patterns, or on the state, even while we must act as citizens to seek the best policies. Witness to justice must begin with personal practice, with sharing of resources, and with attention to those in greatest need such as refugees and migrants. Politics, and economics, must be personal.

Martin’s refusal to join fellow-bishops opposing Priscillian in using the power of the state as a substitute for charity and persuasion is also a potent example. It speaks not just against the institutionalized violence still countenanced by the state (not only in legalized murder, but in systematized incarceration) but against compromise in using tools of repression supposedly in the name of justice.

Last but not least, Martin devoted himself to prayer and fasting. Spiritual or ascetic discipline is not an alternative to activism, but must lie at its heart.

A couple of weeks after the election I was in San Antonio, Texas, where the strong religious traditions of the Hispanic population include significant devotion to Martin - “San Martin Caballero” - as a patron of those in need. I found there a medal of Martin which has been on the lapel of my jackets (on a safety pin, used by many after the Brexit experience of last year in Europe to indicate solidarity with the marginalized) almost every day since. St Martin is for me a patron in the formation of a Christian resistance. I am not sure where this journey with him leads, but it is now a part of my daily reality, and has made me think more clearly and directly about the curious commitment of the Christian. And occasionally - whether or not I should - I am reminded, facing the reality of unjust and unfitting leadership, that “a cada cerdo le llega su San Martín.” St Martin, pray for us.