Bread and the Bible

This week I am teaching a course in the summer session at Yale Divinity School on bread in history, focusing on biblical and theological tradition.
As well as considering a variety of biblical texts (more on that in another post maybe) we are baking breads that, if not necessary completely authentic (probably an illusory quest) then at least illustrate some of the key issues that faced producers, eaters, and those who wrote about these issues in the ancient Mediterranean world.

In a paper I gave at the Society of Biblical Literature Annual meeting in 2014, I suggested that for eaters in most places and periods relevant to biblical literature and to ancient Christianity and Judaism, there were three factors that made bread more or less desirable, and an indicator of one's status and wealth (or lack thereof): color (refinement, bolting of the flour etc.), grain (wheat or barley, in particular), and fermentation or leavening. 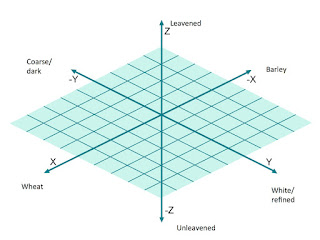 In this week's course we are dealing with the last two issues in a variety of ways, and are doing some baking that involves using older grains and seeing their properties. We have been using barley and emmer flours, these being the two most significant cereal crops in the ancient Mediterranean, at least until the emergence of bread wheat, as well as einkorn and modern wheat.

A few days ago to prepare for the course, I created a barley starter or sour, armed with the knowledge from previous attempts that it would probably begin well, but then become too acid unless used on about day 3. We used the barley starter (about 500g) to create a leaven with both barley and emmer flours in equal quantities. 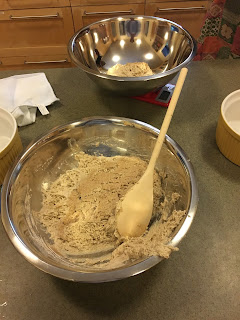 The leaven worked well; it did not expand a great deal, but was unmistakably active.

We split the leaven, keeping some back for a new starter, and with the remainder we then made a slightly wetter dough (c. 50% hydration) for a large loaf to be baked in a pot, and a slightly drier one for small flat breads, both with equal quantities of barley and emmer again.

The large one we proved in a banetton - not too archaic, although I don't think it's implausible to think of proving in a basket or other vessel in ancient times - then slashed and baked the result in a heated enamel pot at high temperature (500F).

It rose more than expected, and the bread had a well-developed flavor - quite sour, but allowing the grains to come through. The texture was of course fairly dense, given the flours used, and still quite moist. As with rye breads that may be more familiar to many, these might be better on the second day than straight out of the oven. 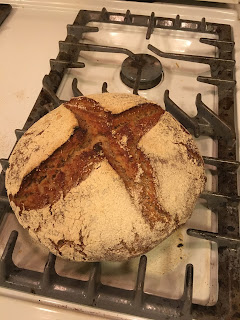 The other issue we were considering was of course that of leavening. My barley 'sour' was created just by mixing flour and water. No yeast in the usual sense - brewer's yeast - has been added to these breads. They help illustrate what many scholars and translators seem to be unaware of when dealing with texts such as the Exodus narrative about the importance of unleavened bread, the Leviticus prescriptions for bread without leaven as sacrificial offerings, and the parables and sayings of Jesus about leaven; namely, that leavening is a spontaneous process that arises when flour is moistened, not an adulterant like brewer's yeast.

The significance of all these passages is somewhat different when we realize that leavening has this almost mysterious character, and that it arises within dough itself rather than being an additive. For Exodus, this helps us understand the concern about time; in Leviticus, we see leaven as corruption or at least instability that makes it less suitable for an offering; and in the examples from Jesus' teaching, negative and positive alike, it is the power of leaven to communicate itself, and assimilate other dough to its transformed character, that underlies the image.