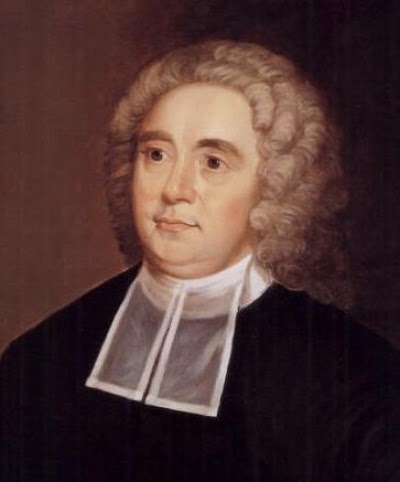 The Berkeley Divinity School motto is drawn from 2 Corinthians 10:16, Paul’s reference to a mission “into the regions beyond”; this expansive vision is echoed in the Acts reading tonight (1:1-8) for our observance of St Luke, which presents the spread of the Gospel in terms of a sort of theological manifest destiny, “from Jerusalem and Judea even to the ends of the earth.” But as you sit listening to an Australian Dean, fetched from the ends of the earth and from regions beyond anywhere our founders could have had in mind, you must surely be asking – well, “beyond what”?

The first and most straightforward meaning of the “regions beyond” was of course geographical. And this vision of an expansive mission is reflected not just in the School’s motto but in its name.

Anglo-Irish philosopher Bishop George Berkeley managed to become our founder, in spiritual terms at least, without knowing anything of the fact. Berkeley, previously Dean of Derry, travelled to Rhode Island in 1728 and lived there awaiting promised support for a new college to be based in Bermuda. The funds never arrived, and he left again in 1731, giving his property to Yale - the first Berkeley-Yale partnership! Berkeley became Bishop of Cloyne in Ireland, and died in Oxford in 1753, a century before Bishop John Williams of Connecticut became the material founder of the School and borrowed Berkeley’s name for this project in theological education.

At the dedication of the original St Luke’s Chapel in Middletown in 1861, Williams referred to the naming of the School as intended “to commemorate the pious zeal of Bishop Berkeley in the cause of clerical education, and his relations to our early Church in Connecticut.” Speaking myself as another intercontinental dean, Berkeley’s willingness to go into “regions beyond” has a certain resonance as an example.

Although a famous philosopher, Berkeley’s popularity in mid-nineteenth century America had much to do with his interest in a pioneering and expansive Christianity, by Williams’ time seen walking in step with Manifest Destiny.

Berkeley had penned famous verses about the decrepit old world and the hopeful new to express the basis of his project:

The muse, disgusted at an age and clime
Barren of every glorious theme,
In distant lands now waits a better time,
Producing subjects worthy fame.

The last stanza of that same poem (“On the Prospect of Planting Arts and Learning in America”) famously begins “Westward the course of empire takes its way” - an inspiring or perhaps a fearsome phrase, depending on your race and language. This line of Berkeley’s also inspired the founders of another educational institution on the West coast of this country to choose his name for their new town, a few years after this School had taken it first.

So while this is the earlier meaning of our “going beyond,” it has elements that we ourselves need to go beyond; we need to claim that expansive and global perspective, but not the imperial and colonial visions grounded in exceptionalism; we need to go beyond them, to loving service of a diverse and fragile world.

This leads to a second “beyond.” George Berkeley’s own movers apparently uploaded “fifty eight boxes, whereof fifty-five contain only books” when he came here. I think Felicity and I between us may have beaten Berkeley on this front at least, if not in erudition. In fact when Berkeley left New England and gave Yale his books he doubled the size of the University library at the time.

Berkeley was obviously not skimping on the resources that would provide those hoped-for students with the best that Greco-Roman and Judeo-Christian thought had to offer. He was intending to create not just a shadow of institutions like his own Trinity College, Dublin, but to go beyond them with a new bright exemplar, of which the old world’s universities would seem mere types and shadows.

This ambition was a genuine point of continuity when Berkeley Divinity School was actually founded. In the same sermon at the dedication of the first St Luke’s Chapel, Bishop Williams wryly observed that “An unlearned clergy is one of the sorest evils that God allows the Church to impose upon herself.”

Heaven knows God seems to be getting more permissive in this regard; theological education has seen better days - better months and years even - and the danger may be not just that we fail to go beyond past ambitions, books, boxes and all, but that we actually retreat from the demands of theological learning because the Church often seems to have forgotten its usefulness.

It is of course now apparent that there are other ways of doing theological education than the residential seminary, and also that there are forms of scholarship and wisdom inconceivable to Williams or Berkeley; but here at Berkeley and Yale, set in one of the world’s great universities, our calling is not to fall back from the ideal they pursued but to go beyond it, to provide even better education not just for ministers and teachers but for theological educators themselves, and to do so in a setting where denominational tradition and ecumenical conversation are friends, not enemies, offering depth and breadth respectively.

Beyond exceptionalism, then, to a global vision; beyond ignorance and sectarianism to an expansive pursuit of knowledge; but the third “beyond” is most fundamental, and most elusive.

When he set out for New England, Berkeley had already made a name for himself as one of the great philosophers of the day. While the history of Western thought now often skips from John Locke to David Hume, it used often to stop and sojourn with George Berkeley. You’ve nearly all heard something of the issues he presented, if not under his name; remember that freshman philosophy class discussion about whether a tree that falls in the forest makes a noise if there is no-one around to hear it? This is Berkeley to a tee, although he never used the example himself. We could put it thus: the external world means nothing, if we do not grasp it in thought.

Berkeley’s idealism, his philosophical insistence that everything we know has to be thought into being, has been widely misunderstood as a sort of pure subjectivism. Its most famous if not its most sophisticated critic was none other than the great lexicographer Dr Samuel Johnson, whose response to Berkeley’s idealism was recorded by Johnson’s biographer Boswell:

“After we came out of the church we stood talking for some time together of Bishop Berkeley’s ingenious sophistry to prove the nonexistence of matter, and that every thing in the universe is merely ideal. I observed, that though we are satisfied his doctrine is not true, it is impossible to refute it. I never shall forget the alacrity with which Johnson answered, striking his foot with mighty force against a large stone, till he rebounded from it – ‘I refute it thus.’”

Johnson has even more sore-toed sympathisers today, in an age where materialism is often taken for granted, than in the eighteenth century; but he and they alike fail to grasp one key thing about Berkeley’s idealism.  Berkeley did not think that objects or things really just came and went as we ourselves perceive them or think of them, but rather that they exist because they are perceived and willed to exist, by the mind of God.

So I for one would like to think that Bishop Williams was making a pious philosophical joke of sorts in choosing the name for us. Bishop Berkeley had apparently managed only to think of his seminary; but in the end, even a century later, that proved enough - at least when God thought of it too.

In the end no Divinity School, no Church, no human being, can escape the question of what being and truth itself lies beyond our immediate knowledge; unless we affirm that all our exploration, all our passion for justice and truth, is itself a form of “divinity,” and that in the end we are God’s big idea, rather than the reverse, we stub our toes on the rocks of a self-defeating pragmatism.

So there are still frontiers left to explore and seas to cross at Berkeley. Let us be a community characterised by diversity and curiosity, inspired by justice and wisdom, and together with St Luke and all the saints – George Berkeley and John Williams among them - go beyond what we already know, and thus find the one whose thought we are, and whose love we share.