Bread and Roses: Elizabeth of Hungary, Poverty, and Justice 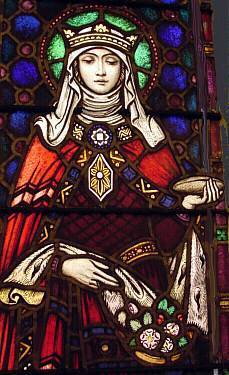 [Given in St John's Chapel at the Episcopal Divinity School in November 1999. Posted for Labor Day 2014]

A woman, a widow with three children, no stranger to poverty, dies of exhaustion at the age of 27. The setting could be the barrios of Manila today or of rural Palestine in the first century, but it was Marburg in Germany in 1231. The woman was not born to poverty but to wealth and power, and chose a life of service to and even identification with the poor. This was St Elizabeth of Hungary.

Elizabeth was born in Hungary, a daughter of the King, and at 14 married the ruler of one of the principalities in what is now Germany. Like Margaret of Scotland whom we remembered earlier in the week, at least part of her fame lay in generous and compassionate use of power to address gross poverty and sickness. Like Margaret, Elizabeth was distinguished by charitable works and the founding of hospitals. Elizabeth is somewhat different, however, in the extent or depth of her identification with the poor.

Elizabeth, like Hilda of Whitby whom we celebrated yesterday, is the subject of one of the windows in the North transept of the St John’s Chapel at the Episcopal Divinity School. Many are not aware of this and some might assume that Blessed Mary is the royal personage, but no, it is the rather un-Anglo-Saxon Elizabeth. The popularity of Elizabeth in Episcopalian stained glass and suchlike in the later nineteenth and early twentieth centuries would make a good Master’s thesis for anyone curious the intersection of art, popular piety and social concern. She stands opposite the window of her teacher Francis – whether there was any intentionality about that I do not know – but her pairing with Michael the Archangel in the transept is said to represent the balance or interdependence of spiritual warfare (his work) with social outreach (hers).

But I confess to being both fascinated and disappointed by various details of the window. She is depicted as a queen, which she was, distributing food to children. Her complex crown – a triple crown in some depictions – reflects her royal birth, royal marriage and heavenly coronation as a saint.

The disappointment comes mainly from the image of Elizabeth as the kindly philantropist, moved internally but unaffected materially by those to whom she ministers. Her clothes are royal, theirs are rags. In fact her own life was marked by personal struggle and suffering, including poverty. Her generosity during her husband’s life went beyond noblesse oblige to sacrificial and controversial measures. She used both her dowry and later her personal jewelry to respond to the needs of the local people in Wartburg, earning as much opposition and anger from others in the court as appreciation from the poor.

From the age of sixteen she was greatly influenced by her older contemporary Francis of Assisi, who had also chosen poverty rather than being born to it. When Friars visited her city she was inspired by the preaching she heard and became a Tertiary, the first member in Germany of the third order which opened the Franciscan life and spirit to women and men who were married or otherwise engaged in secular life.

Here’s the part that fascinated me. In her basket are bread and roses. When EDS tutor David Siegenthaler pointed this out I first didn’t think much of it, although it reminded me of the old socialist song of that name:

“As we go marching, marching, in the beauty of the day,
A million darkened kitchens, a thousand mill lofts gray,
Are touched with all the radiance that a sudden sun discloses,
For the people hear us singing: Bread and Roses! Bread and Roses!”

I discovered that the basis of the image in the window is a story of Elizabeth’s attempt to continue her service to the poor after the death of her husband and the accession of his less sympathetic brother. As she was smuggling bread out of the castle in her apron, she was challenged by her relative, and when she opened the apron what was inside were just the roses.

The epilogue to this connection was my discovery that the socialist and feminist anthem quoted was written in 1912 at the time of the strike by women mill workers in Lawrence, Massachusetts. I cannot help wondering whether this window or others like it were known to the writer, to the singers, or how this window looked to those who worshipped here in that year.

Having donned the Franciscan habit, Elizabeth lived with and for the poor thereafter until her early death. In her identification with the poor despite her royal status, power and wealth, and her acceptance of the radical spirit of the Gospel and not mere of philanthropy, Elizabeth not only fills the role of saint, or saintly woman in particular but actually transforms it. Praxis here is not merely charity or even activism, but a personal spiritual transformation that expresses the necessity of faith and justice to one another, not just bread but roses too. Retaining both elements, bread and roses, the artist of the window invokes for me something of the same “both and” expressed in the song:

"Our lives shall not be sweated from birth until life closes;
Hearts starve as well as bodies; give us bread, but give us roses!"
Email Post
Labels: Bread and Roses Strike Elizabeth of Hungary Episcopal Divinity School Labor Day Lawrence Textile Strike