Applying our Hearts to Wisdom: Sermon for the Funeral of Frank Henagan

From the Funeral Service for Frank Henagan, held at the Chapel of Trinity College, January 13 2014 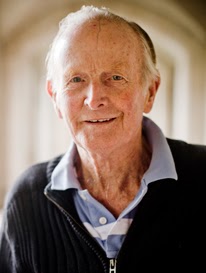 One of those alumni of the College who sent us reflections on Frank Henagan's time at Trinity was honest enough to observe that there had been those students and staff who initially sneered at or dismissed Frank. Frank did not, after all, possess the gifts which are most clearly valued in an academic community - or at least did not seem to, because in fact as we have already been reminded Frank had more by way of formal educational achievement than most people knew, having matriculated and studied at RMIT. Nevertheless his unprepossessing demeanour, and the predominantly manual labor to which he unstintingly applied himself at Trinity, did not fit the most prevalent conceptions of wisdom and education or its fruits.

Wisdom and knowledge are not the same thing however; nor are wisdom and education, even if they are related. Most of us came over time to see that Frank was a wise man. This was true not only in regard to the practical wisdom that was easy to see in his great love of sport and in matters of physical fitness; it was also the case with regard to various larger and smaller matters of human endeavour and character - his pithy assessments of people, ideas, and projects were always worth attending to. I remember the time when at a Senior Management Team, confronted with some imponderable matter, Don Markwell suggested “Let’s ask Frank!”. And we did.

Wisdom is more than an attribute about which to celebrate or eulogise Frank, however. Wisdom is something which points to the deepest truths of our reality. It is the subject of a set of writings in the Bible’s Old Testament in particular, including parts of the Psalms as well as the books of Job and of Proverbs, not so well known perhaps because they are not stories, and are focussed not on the miraculous or the other spectacular manifestations of the divine in human life, but on those things learned from experience and from observation of creation itself, accessible to all, if only grasped by few. Wisdom, we are also told, comes from God and has something of divinity about it.

The model human being in this Wisdom Literature is not the prophet, priest, or king, but the sage - the wise man or woman who understands the realities of life, not least its limitations and its vicissitudes, makes choices accordingly, and so not only lives well but fosters the well-being of others.

Psalm 90, which we have heard sung today somewhat laconically representing this view, reminds us that we are like the quick-growing grass of summer, and that our years number "threescore years and ten” or for the strong perhaps “four score”, and praying “so teach us to number our days that we may apply our hearts to wisdom”.

Frank of course, happily for us, was strong enough indeed to get his four score; but for a community like this one, focussed on excellence and suffused with privilege, Frank Henagan was indeed a sage, a living reminder of what true wisdom is, and of how different it might be from the mere accumulation of learning or the glib rhetoric of success. The apostle Paul in today’s first reading claims that "God’s foolishness is wiser than human wisdom, and God’s weakness is stronger than human strength.” George Herbert  speaks of the recognition that the simplest, least glamorous activity could, when God was seen in it, and when done for the sake of others, become “drudgery divine”.  Wisdom and its attendant divinity consist not of the spectacular, but of the real.

Many were challenged to emulate Frank’s self-discipline, or to count their blessings, or by heeding his advice learned numerous other sound and practical things about themselves and life. The most abiding lesson of Frank’s wisdom to us all however might be theological - a reflection of the insight that Wisdom is not merely benign or even precious, but relates us to the mystery of God in creation, which although we experience it in many ways and through many good things, is never to be confused with them.

Frank quietly but surely placed his own faith in this claim - and proclaimed it more than once in this Chapel as an unlikely but profound preacher. The gifts that he shared with us belong to and point to a truer wisdom, a more profound beauty, and a more ancient love than any we yet know in full. As we pray that we too may so number our days that we may apply our hearts to wisdom, we commend Frank, and ourselves, to this eternal love, this transcendent beauty, and this holy wisdom.