St Margaret of Scotland: Loving the Bible in the Church Catholic 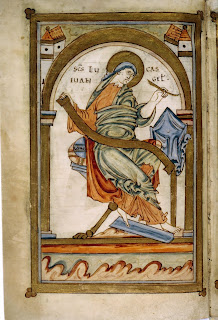 Margaret of Scotland could be said to provide evidence for the existence of God and the fact of miracles, because she was in fact English - and if you know the Scots or those of us with substantial heritage of that nation, you will know that the idea of revering an English person as a saint is contrary to all nature.

Margaret lived in the 11th century, when there was great turmoil in England culminating in the Norman conquest. She was a member of the old English royal family, a niece of Edward the Confessor, and her father fled to the continent during the power struggles of the time - to complicate things further, she was actually born in Hungary (which may have made it easier for the Scots to accept her as a queen, let alone a saint).

After an abortive attempt to return and seize power, her family found themselves in Scotland, where she met and married the King, Malcolm III Canmore - this is the Malcolm whom Shakespeare aficionados will remember as the young man who succeeds the wicked Macbeth.

Despite appearing in a great work of literature, Malcolm was not himself literate. The Life of Margaret written by Turgot, bishop of St Andrew’s, not long after her death, includes some poignant accounts of how this played out, not about literacy in general but specifically regarding Margaret’s love of scripture and her communication to Malcolm of the Gospel.

Margaret, Turgot tells us, placed herself under scripture, “wisest of rulers”; and we are told that she was an avid collector of scriptural books - remember that the idea of a Bible in a single binding was almost unknown in this period, and to have a complete personal library of scripture was unusual. Turgot speaks of Malcolm’s growth in piety and spiritual discipline under Margaret’s influence but also about how the illiterate king responded to the physical forms of scripture:

"Although he could not read he would turn over the books she used for her devotions, kissing them and taking them in his hands ...Sometimes he sent for a worker in precious metals whom he commanded to ornament that book with gold and gems and when the work was finished the king himself used to carry the volume to the Queen as a proof of his devotion”.

One of these particular books is the subject of another story in the Life, concerning its miraculous preservation when dropped in a river; but just as remarkable is the fact we actually have it still, in the Bodleian library at Oxford, where it can be seen today (the illustration above is from this book).

It is of course possible to honour the content of scripture without regard to its physical form - some of the most precious biblical manuscripts are scraps of papyrus discarded as trash, dug up in Egyptian rubbish heaps in modern times. Margaret’s example however provides a coherence of the aesthetic and ritual form with the verbal.

There is one other form that scripture took in her life and Malcolm’s, without which the picture is incomplete. While privileged and powerful, they made remarkable efforts for the poor. Turgot tells of their regular practices of feeding the hungry in their own banquet hall, and of washing the feet of the poor.

I offer these reflections on the life of St Margaret not as a last-minute supplementary Church History course - the Middle Ages do get relatively short shrift around here admittedly - but for Scripture’s sake, the Gospel’s sake, and for God’s sake.

It is tempting in the trenches or foxholes of contemporary Anglicanism to construct priorities and positions that undermine our own real purpose in ministry and mission - and the use of the Bible may be the most obvious and important case in point. Because there are other Christians whose single-minded emphasis on the Bible can be overwhelming, Anglicans of catholic or broad mind can be tempted to think scripture belongs to those others, or to fundamentalists. In fact scripture belongs to the Church - to the living Church, stumbling its way through history in faith and doubt, upholding the creeds and the sacraments as well as scripture.

Margaret’s witness suggests a three-fold approach to scripture, in accepting its place as “wisest of rulers”.

First, and perhaps least importantly, there is an aesthetic dimension - Margaret’s beautiful Bible. Not all of us have golden or bejewelled Gospel books, and scripture can indeed speak through scraps - but should it, if it need not? When we celebrate the Eucharist in particular, scripture should be treated coherently with what we say about the importance of ritual and aesthetics. The juxtaposition of a silver chalice with a text in a plastic sleeve or a single photocopied sheet makes its own statement about the Word of God.

Second, there is the content - Margaret’s earnestly-pursued Bible. The pattern of the daily office and the lectionary - which have us read the whole of scripture regularly, not just a sort of bourgeois greatest hits list - make points about the reading of and learning from scripture about which we seem to be becoming more and more hesitant or sceptical, perhaps for the reasons I mentioned above. The calling of the Catholic Anglican Christian is not to be a poorer scholar of scripture than the fundamentalist but to be a better one.

Third, and most crucially it must be lived - Margaret’s charitable Bible. It is entirely possible to read much, and from beautiful volumes of scripture, but to live as though it did not matter, or as though some view about scripture and its clarity or inerrancy mattered more than the news that God is love. Unless our lives can reflect the character of the God revealed in scripture, the God of Christ crucified and risen, however imperfectly and provisionally, the Gospel cannot be heard.

Honour the Bible in worship. Read the whole of Scripture. Live the Gospel. This is the Catholic faith. May St Margaret and all the saints inspire us to emulate their example.