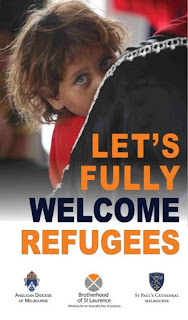 This past week a banner was unfurled on the tower of the Cathedral, with the words "Let's fully welcome refugees".

This election season we can speak freely about refugee policy in for all the wrong reasons - since neither major party has been willing to give the claims even of international law--let alone of moral principle--the same emphasis being given to border control, as a result our banner is politically non-partisan.

This election is being marked by a competition between the two parties to see whose policies will appear more punitive to asylum seekers who arrive by boat, although it is far from certain that what may seem unattractive options to us will even deter asylum seekers at all, whose choices in their places of origin apparently seem to them to outweigh the risks of leaky boats.

While we ought not to suggest that politicians as a group do not care, or that the policy issues are simple, there are prominent leaders whose loose treatment of the truth about asylum seekers - such as the regular suggestion that to be a refugee is somehow itself illegal - raises profound questions of integrity; and there are sections of the media whose enthusiasm for pointing to the admitted evils of people smuggling are not remotely matched by interest in the conditions under which asylum seekers have been housed, or the way xenophobia is being exploited in the political arena.

The Church does not make immigration policy, but it is right for us to challenge our leaders and our community about issues a basic as these, and to take part in conversation about the kind of society we ought to be. Our nation, a country which owes so much to immigrants, including those involuntarily transported and many driven from homelands by need, is wrong to construct its public conversation about refugees as we are now largely doing, turning asylum seekers into scapegoats.