Meseret Defar and the Feast of the Assumption

As she ran through the finish line of the women’s 5000m final last week at the London Olympics, Ethiopian runner Meseret Defar did two things; she began to cry, and she reached under her runner’s bib to produce a printed cloth icon of the Virgin and Child, which she variously held out to the cameras, kissed, and placed over her own face.

The icon was very similar to this one, a modern and slightly sentimental version of a traditional type called by western Christians Our Lady of Perpetual Help, and by eastern Christians like Defar herself the Theotokos of the Passion (Theotokos meaning God-bearer or Mother of God).

Defar’s action generated a certain amount of interest in social media, partly because its televised broadcast was perplexing to some. This use of an image, and even an object, was obviously confronting to many, even independently of the reference to a particular set of beliefs.

According to at least one report, the NBC broadcast in the USA did not show these shots at all during its live feed, being embarrassed or perplexed by them; of course US TV is actually covered with religious content, and when a winning athlete does less embarrassingly-material things like point to the sky, it raises no eyebrows. Generic and bodiless religiosity "out there" is easier to take than a material image, and Christianity in particular is often assumed to be something too "spiritual" and refined to be stuck into a faintly embarrassing place on a black woman’s body.

In Ethiopian circles the reaction was, perhaps predictably, rather different. The Twitterverse revealed that Defar’s action fanned the embers of an ongoing theological debate among Ethiopian orthodox Christians about the Virgin Mary herself. Traditionally these and their close brethren, the Egyptian or Coptic Orthodox Church, have differed from Roman Catholics in not accepting the doctrine of Mary’s Immaculate Conception – the idea that she herself was miraculously conceived without sin. More recently however, under western influence, some have been inclined to claim this doctrine as their own.

Today on the Feast of the Assumption, as it has traditionally been known in the West, we are commemorating the end of Mary's life, not its beginning. This has also been interpreted different in East and West; eastern Christians know this as the "Dormition" or falling-asleep of Mary, and acknowledge her physical death more clearly. Anglicans hold various views on these questions, and the insistence of the Roman Catholic Church that these beliefs are dogmas to be held by all is a point of serious division. 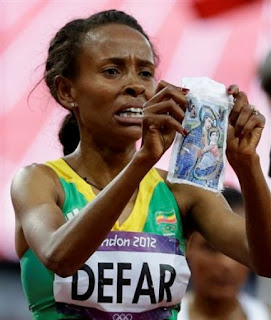 For all these differences, one of the things that devotion to the Virgin Mary reminds us of is the material, physical character of Christian faith.

Arguments about the Assumption of Mary and the Immaculate Conception are not simple; more important perhaps than the answers are the questions they raise. In considering how Mary’s body began and how it ended, what lies squarely in the middle - between conception and dormition, and between the theological possibilities - is the fact of her body.

Patriarch of Defar's Ethiopian Orthodox Church, Abune Paulos, wrote his doctoral thesis at Princeton on the topic of the Feast of the Assumption. In it Paulos speaks representatively of that physical reality:


It is through her flesh, her blood, her maternity, that our Lord and savior shares in our humanity.

In this body – in its more than faintly embarrassing places – the incarnation becomes a reality. Images of it can have their drawbacks, but are useful – they remind us that faith is not only about the invisible and inward, but about the physical and material world into which the Word comes as flesh. Icons of Mary point to this – but we all, in our own bodies, like that of a passionate and determined athlete last week, have the capacity we reveal glimpses of what is true about ourselves, and the world, and God.

[From a sermon given at the Chapel of Trinity College on the Feast of Mary, Mother of the Lord, August 15 2012]