Dining with the Dead at Tipasa

In summer, the gods live in Tipasa, and the gods speak in the sun and the fragrance of the artemisias, the sea armoured with silver, the unbleached blue sky, the ruins covered with flowers and the light bubbling in the heaps of stone (Noces à Tipasa).

As Camus implied, the ancients knew well the extraordinary character of Tipasa, a few hours drive from Algiers. They left some of the best views of the ocean not just for the gods but for their own dead, on the west outside the city walls, looking towards the great mass of the mountain Chenoua as it falls down to the sea. There they established a necropolis, where they gathered to eat and drink with and for the departed in refrigeria, refreshments, for living and dead alike.

As Christianity displaced the old gods, it took over their dwellings and some of their celebrations as well. Burying the dead at Tipasa remained festive as it had been before; the cemetery was not a morbid place, but one where the living and the dead celebrated together, the hope of the resurrection now a focus for joy. 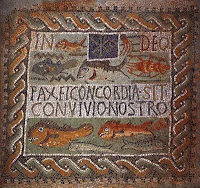 A famous mosaic found at Tipasa wishes the participants in such Christian convivia a blessed time as they ate and drank together in remembrance of the dead: Pax et concordia sit convivio nostro ("Peace and concord be to our banquet"). The panel is covered with fish; these are not so much specifically Christian symbols since they are found in many Roman mosaics, but there is still great seafood to be had at Tipasa, and fish would have figured prominently in some of the meals.

These events were closely linked to other Christian banquets such as Agape and even to the Eucharist itself.

Sometimes convivia took place outdoors in the African cemeteries, but Churches were also built in the necropolis to accommodate the celebrations, especially when the remains of martyrs or other holy persons were close by. A chapel built by the bishop Alexander in the fourth century at Tipasa had space for his own justi priores, "worthy predecessors" who were patriarchs of the ecclesial family as well as heroes to remember from times of persecution.

Outside Alexander's church are a number of concrete dining benches, semi-circular installations formed like the stibadion used in homes of the period, around which those celebrating would recline to eat. These were also decorated with mosaic in the central table section, dedicated by individuals or families who would return for these faithful feasts. 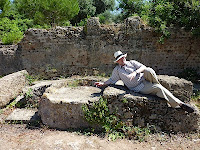 Most remarkably, at least one of these concrete picnic tables is inside Alexander's church. Although  the Eucharist would have been celebrated there and had ceased to be so closely linked to regular dining, the refrigerium was also a holy meal for these Christians. The deep significance of these gatherings has led one scholar to call the participants a "second Church" whose ritual life was less focussed on bishops and basilicas than on events like refrigeria outside the city.

But Alexander's Church and its dining areas suggest the "first" and the "second" Churches were made up of the same people; that to understand their life we need to consider both what took place in the city and outside it, rather than paying attention only to the more familiar "liturgical" elements of their communal life in the basilicas.