A Fish Story in the Talpiot Tomb

Another year, another strange suggestion from Simcha Jacobovici and James Tabor about tombs and ossuaries in Jerusalem.

Few people, or at least few scholars, looking at the images supplied have been impressed by the idea that the etched figure on a newly-published ossuary is the "great fish" of the story of Jonah. From that unlikely suggestion and some dubious interpretation of fragmentary inscriptions, Jacobovici and Tabor have sought to draw further speculative links with the early Christian movement, claiming even that this would be the first Christian art and a symbol of the resurrection.

If it's not a fish then what is it? The counter-suggestions of the first few days after the announcement tended to emphasize architectural motifs, such as a nephesh or grave monument; thus both Steve Fine and, initially, Bob Cargill.

Those have now been supplemented, or just corrected, by comparison with other ossuaries that have cups or vases on them. This has been made easier by Jacobovici and Tabor's team offering a museum replica that makes the orientation of the image on the box much easier to see (the initial photos were taken with a robot camera).

The suggestion comes from Antonio Lombatti, whose blog shows a number of ossuaries that have vases or cups, some of which are at least generally comparable in shape. Cargill himself has drawn attention to this and now defers to it as a better suggestion than his initial thoughts about tomb markers. 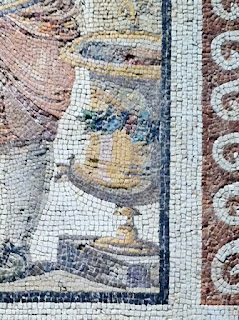 Lombatti and Cargill refer to these as "amphoras" but I am not sure this is the best description. The foot of the vessel (assuming it is that, and I do think it is) has very narrow shape often associated with an amphora, but the rest of the shape - the bulbous lower part with low-set handles, and a bell widening at the top - is much more reminiscent of a krater, the type of large vase used to mix wine at banquets. These also often had knob-like feet, as in this example:

For that matter the other vases shown in Lombatti's post have large looped handles, and are of the type often referred to as kantharoi, which are also drinking vessels, whereas amphoras were typically for storage. The small boss on the bottom of this vase is not so unlike those of the other kantharoi that Lombatti shows.

Vases of various shapes were used as grave goods in Greco-Roman settings - many of the vases now found in museums came from such sources. But at the risk of over-reading the image on the ossuary, it is the type of vase used at banquets, that has overtones of eternal festivity and bliss, as funerary art often did. Maybe recognition of the krater will help put this to rest as well.

Update: A commenter has asked about the relevance of the form to 1st century Palestine. My slightly oblique answer has been to replace the picture I originally linked to a 5th century BCE krater to a 4th century CE mosaic from Antioch, depicting one from much later; the point is that these forms were ubiquitous and persistent both in fact and in art.