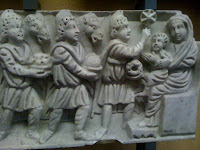 The virginal conception of Jesus celebrated at this time of year is an obvious problem for sceptics; but it is also a challenge to the faithful. Very orthodox Christian theologians have struggled with the tension between stories that suggest, prima facie, that Jesus has a human mother but God for a father, and on the other hand the creedal belief that Jesus is both truly divine and truly, fully, human.

Knowledge of the biology of reproduction unavailable to the ancients underlines this problem, although anyone who tries to correlate chromosomes and Christology is going to bend biblical texts into shapes for which they were never intended. In fact ancient science might make this worse, since for many the primary or seminal characteristics of an embryo came from the male side, and the female was incubator rather than coequal contributor.

Little wonder that then or now, views of Jesus as a divine being only masquerading as a human keep recurring, or that theologians such as Dietrich Bonhoeffer have questioned the value of the virgin birth stories while wishing to affirm the orthodox doctrine of the Incarnation.

In a recent reflection the Rt Revd Professor N. T. Wright offers another version of this surprising struggle between Christian faith and virgin birth. Observing that "Jesus' birth usually gets far more attention than its role in the New Testament warrants" and that the infancy narratives "have no impact on my reconstruction of Jesus' public agendas and his mind-set as he went to the cross," Wright nonetheless ventures into the quagmire, and gets stuck on still another problem.

For Wright the stories of Jesus' birth, like the Gospels generally, are profoundly Jewish documents. So far so good. But Wright states "there is no pre-Christian Jewish tradition suggesting that the messiah would be born of a virgin. No one used Isaiah 7:14 this way before Matthew did". On the other hand "the only conceivable parallels [to the infancy narratives] are pagan ones, and these fiercely Jewish stories have certainly not been modelled on them". He is referring of course to stories of Olympian gods conceiving children with mortals, often noted as as real but awkward parallels to the story of Jesus.

So the problem for Wright is a different one; not the joining of the divine and human, but the combination of Jewish and "pagan".

With this assumption in mind, Wright offers a speculative, honest, and for him uncomfortable "tradition history", that surrenders not the shape but the ultimate origin of the stories of Jesus' birth to a virgin mother to the "pagan" side of this dichotomy as it accounts for the development of the narratives:


a double move took place: from an early, very Jewish, high Christology, to a sudden paganization, and back to a very Jewish storytelling again.

Wright would probably admit that "pagan" is an unsatisfactory shorthand - but it is actually a much later and pejorative term, and serves ill to describe Greek and Roman or other Near Eastern religious belief and practice. But this is not merely a matter of rhetorical imprecision for the sake of clarity; by offering this construct of "paganism" as a sort of pole opposed to all things Jewish, Wright misrepresents the relationship between Jewish and (other) Greco-Roman culture and thought.

The Greco-Roman world should not be understood as a threatening sea lapping at the shores of a Jewish island, with Jesus and his people "fiercely" sandbagging their religious life against a rising "pagan" tide. Jews were very much a part of that diverse world, if a distinct people and culture within it, like many others. The undoubted emphasis on issues of purity and identity in ancient Jewish belief and practice implies a need to negotiate how to exist in that world, as one people among many peoples.

In fact the signs of "pagan" influence are many in ancient Judaism, and hence also in earliest Christianity. One example may suffice: the most widely-read version of the Jewish scriptures in Jesus' time was in Greek. The Septuagint (LXX), translated three hundred years or so before Jesus' time, was known to, and often quoted by, the "fiercely Jewish" NT authors including Matthew and Luke, whose infancy narratives are at issue here. The assumptions made by all sorts of scholars and other readers that the Hebrew text (which in the form underlying modern Bible translations was established later than LXX, although obviously LXX was based on the earlier Hebrew) is somehow more authoritative and canonical for Christians than LXX are very weak, if the attitudes of ancient Jews and Christians alike (including the citation of LXX in the NT) are anything to go by.

While the very fact of a Greek Bible already queers the picture of Jews maintaining a hermetically-sealed thought-world, a famous text from the Septuagint also suggests an alternative catalyst for the development of the infancy narratives.

"Therefore my Lord will give you a sign: behold the young woman will be pregnant and give birth to a son and call him Immanu-El".

"Therefore the Lord himself will give you a sign: behold a virgin will be pregnant and bear a son, and you will call his name Emmanuel".

The "change" (or at least the drift) in meaning that distinguishes the two is the Greek term for a young girl, parthenos, which more directly implies virginity. The translator was probably trying to be literal, but translation is always interpretation, because languages are not constructed of equal elements. In any case, many readers of Isaiah around Jesus' time read the LXX and took its version as gospel.

N. T. Wright acknowledges this issue in passing, but bats it aside: "No one used Isaiah 7:14 this way before Matthew did. Even assuming that Matthew or Luke regularly invented material to fit Jesus into earlier templates, why would they have invented something like this?"

It is actually pretty obvious why the Gospel authors "invented" or otherwise used it - for just the same reasons they used the other biblical texts they interpret as Christological, to make sense of Jesus' life and identity. But if the question is "why suggest a virgin birth" then the answer is even more obvious - Isaiah said so.

Wright however persists with his uncomfortable preference for seeing the origins of the virginal conception as more closely linked to the sex lives of "pagan" gods. We cannot explore properly here whether the "pagan" myths of divine parentage really are such strong parallels to the infancy stories. The late Raymond Brown, admittedly seeking a path to belief in the virgin birth and orthodoxy, pointed tellingly to the thinness of the parallels, under scrutiny (Birth of the Messiah, 522ff). And when the issue was first raised explicitly in ancient Christianity - Tertullian, Apol 21.14 is the earliest case I know - it was in a fairly relaxed way, as though the differences were far clearer than the similarities. There is no need to exclude their influence, but this is not really so self-evident as a motive or model.

It seems Wright would rather deal with the passing discomfort of a "pagan" mythic element which intrudes into tradition history, but is then tamed by a further Jewish-Christian interpretation (see his summary above), than be stuck with the notion that the Greco-Jewish LXX, whose existence and authority undermine the whole Jewish/pagan dichotomy, was actually fundamental to how early Christians (including the most "fiercely Jewish" of them) saw Jesus and his significance. Wright is therefore trying to defend not a particular view of scripture or of the virgin birth, but a view of Jewish and "pagan" identity - a view which stems from the stark dichotomies of the apocalyptic strand of ancient Jewish and Christian literature, but which is ill-equipped to interpret that literature or the history from which it stemmed.

An alternative "tradition history" would share much of Wright's and other scholars' assumptions. Belief in Jesus' divinity begins not with stories of his birth, but with his life and teaching and the events of his Passion - it then leads to reflection both on scripture and his origins, where a "Greek-speaking Isaiah" offers the possibility of a virginal conception, whose details are then elaborated so as to provide an appropriate prologue for the Gospels.

The virgin birth points not just to the presence of divinity and humanity in Christian thought about Jesus, but also, as Wright acknowledges, to the presence of different cultural elements in early Christian literature. For him however the presence of "pagan" elements is more or less "docetic", to borrow a term from later Christological thought - it is about the ephemeral rather than the substantial elements of understanding Jesus. Perhaps, though, the Greek element is actually thoroughly and consistently incarnated too. After all, the theological high point of reflection on the incarnation is the incontestably Greek, and Jewish, and Christian proclamation:  Ἐν ἀρχῇ ἦν ὁ λόγος - "In the beginning was the Word".