Meal and Identity in Early Christianity: A Report from Dresden 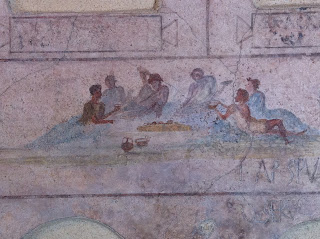 A gathering in Dresden last month was a rare opportunity for scholars from Russia, Canada, the USA, Australia and Germany to have a sustained conversation about the role of food and meals in early Christianity, and so to share - and generate - research into how Christians and others in the ancient world used meals to reflect and create their communities and beliefs. Mahl und religiöse Identität im frühen Christentum ("Meals and Religious Identity in Early Christianity") was part of the research project "Transzendenz und Gemeinsinn" at the Technische Universität Dresden, funded by the German national research body, the Deutsche Forschungsgemeinschaft.

A number of the participants have been members of a seminar under the auspices of the Society for Biblical Literature entitled "Meals in the Greco-Roman World," and have gathered for two or three sessions in the midst of the massive Annual Meeting in the USA each November for some years. The opening address on Wednesday by Hal Taussig of Union Theological Seminary in New York, "Stumbling into a new Paradigm for the Study of Ancient Meals: A Report on the Work of the SBL Seminar on Meals in the Greco-Roman World 2001- 2010" made this link explicit. Soham al-Suadi of the University of Wuppertal gave another foundational contribution, giving a methodological reflection on questions and problems of New Testament interpretation in relation to meals and identity, not least the diversity of approaches.

Two papers on meal traditions outside but related to early Christianity featured on the Thursday morning. Claudia Bergmann of Erfurt discussed the meals of the Qumran library, and argued that the apparently eschatological meal of 1QSa could have been a reasonable practical guide to meals in the Qumran community (along with the meal of 1QS), as well as an ideal or utopian model. Daniel Pauling of Dresden, one of the hosts, discussed another set of utopian meals, this time from Greco-Roman sources as far as the infamous cena Trimalchionis in Petronius' Satyricon.

Three papers later in the day concerned early Christian communities and their use of meals. Richard Ascough of Queen's University in Ontario probed literary and historical indications concerning meals and identity, especially in the prominent eating scenes of the Acts. Dennis Smith of Phillips Theological Seminary in Tulsa focussed on realia, challenging common assumptions about the likely size of early Christian meetings with evidence for the (small) size of dining rooms where they probably took place. Maia Kotrosits of Union Theological Seminary discussed Acts again, questioning modern interpretive assumptions about "identity" itself, in considering how this emerging group too-easily labelled "Christians" understood itself.

The two papers on a short Friday amounted to a dialogue between two leading German scholars on the question of divine presence and action in two versions of the Last Supper story. Günther Röhser of Bonn used Rahner's notion of Realsymbol to explore how 1 Cor could be understood as indicating Christ as present in the community meal. Matthias Klinghardt, organiser of the conference, spoke on Matthew 26 and the question of how sins are forgiven. Their exchange underlined the distinctive character of the four "institution narratives" of the New Testament and the subtleties involved in connecting them to eucharistic meal practice and belief at this very early stage.

The last day focussed on texts later than the New Testament. Russian scholar Valeriy Alikin discussed how in texts such as the Didache eating and drinking function to create community identity. Lillian Larsen of the University of Redlands related early monastic texts about food and meals to broader questions including those of education of monks; real and metaphoric food seem to have been important for thinking about wisdom, as well as satiety, in these communities.

The last two papers again involved an implicit dialogue, this time on second-century Christianity, and Justin Martyr in particular. Angela Standhartinger of Marburg discussed one of the earliest descriptions of a eucharistic meal, from Justin's First Apology, particularly relative to ancient ideas of sacrifice and communal identity, concluding that there are real connections with ancient cultic norms in this early liturgical setting, but substantial differences also. My own paper touched more briefly on another of Justin's works (the Dialogue with Trypho) in thinking about how eucharistic meals were or were not sacrificial, as well as on other second century texts (Didache, Ignatius and Irenaeus) who use cultic language to talk about eucharistic meals, with - or more often without - making specific links to the Last Supper or death of Jesus. I hope to blog some of this material - which builds on earlier papers I have given at SBL and NAPS - further in due course.

The papers from the conference will be published next year, perhaps in the TANZ series out of Tübingen. Like others who took part I am very grateful to our friends in Dresden for their enterprise and their hospitality.