[From a sermon given at St Peter's College, Adelaide, Ascension Day 2011] 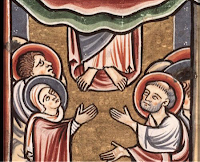 The story of the Ascension from the Acts of the Apostles assumes a somewhat different view of the physical world from our own. Given that we no longer think of the universe as basically three-storied, with heaven somewhere literally above us and the underworld accessible in the basement, we might get caught up on thinking the Ascension was trying to tell us that Jesus has, well, moved upwards. This 12th century manuscript illustration shows the idea, in a vaguely Pythonesque way perhaps.

This is not the only case where confusion can occur when the Bible's assumptions about the universe are different from our own; in the case of creation, the first chapters of Genesis still commend to some a view of literal cosmic origins that can't and shouldn't compete with what we know from physics or astronomy. In both these cases however the texts tell us something of fundamental significance using their own world-view. The point of the Genesis story is not that the world was made in seven periods of twenty-four hours, but that it was made good by a gracious creator, and that our life should be a response to that gift.

So what does the Ascension say?

One thing it says is about Jesus, namely that he goes away. After the extraordinary stories of Holy Week and Easter this may seem anticlimactic - a clean-up strategy for the story, as it were. it is important that he has an end though, because even having conquered death (and even though Christians understand him uniquely to embody the reality of God) he remains a human being, who therefore has to have a specific time, place, culture and context, as do we. It might be convenient for those of us who plead his cause if he kept appearing to disciples through locked doors, but as truly human he must also have his limits.

The other thing it says is about us. Note that in the illustration there are others present whose bodies are related to his - his hands are no longer visible but theirs are, his face and their faces likewise. They have things to do now, to do differently because he is gone.

This challenge is expressed most potently in the words of Spanish mystical writer Teresa of Avila, who famously said:

There you have it. The story is not merely about explaining his absence but suggesting what it means for us. Your hands and mine, now that his are out of view, have work to do, facing the challenges the world offers.