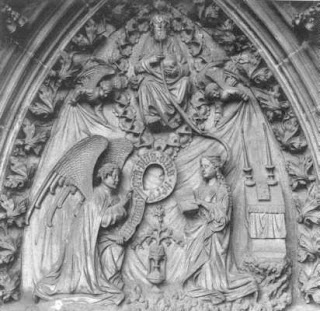 …a woman in the crowd raised her voice and said to him, ‘Blessed is the womb that bore you and the breasts that nursed you!’ But he said, ‘Blessed rather are those who hear the word of God and keep it!’

Above one of the doors of the 15th century Marienkapelle (Chapel of St Mary) in Würzburg in Bavaria is a remarkable depiction of the Annunciation. God sits regally in heaven, above a more or less formulaic scene where on earth the angel Gabriel is speaking to Mary, telling her of what is in store.

But there is a connection between the two realms. A long speaking tube of sorts snakes its way from the mouth of God down to the ear of Mary; and while you may not be able to see from this reproduction, there is actually a small Jesus climbing down the tube, making his way into the world of human hearing from the world of divine speech.

This inventive depiction of the Annunciation reminds us that the incarnation is not, in the last analysis, a conjuring trick with gametes or sexual organs; the theological physiology of the Annunciation is, as these artists and their patrons rightly saw, based on hearing. Mary hears the word which God speaks, the Word which – or rather who – is Jesus.

Let none of us imagine that the more catholic way of being an Anglican can avoid the most serious, the most reverent, the most committed engagement with “God’s word written”, as our reformers called the Bible. But we do so because of God’s true Word, the word spoken and incarnate, who precedes whatever is written. The Bible is the written witness to, the record of, the activity of God’s Word, from those who before us heard the word and did it.

In scripture, “Word of God” means not scripture but God’s whole self-communication, from creation to redemption and beyond, which the Gospel reveals to be not just about words about Jesus but to be Jesus. From Genesis to John, God creates by that Word; God speaks, saying “let there be”, and there is. God’s speech is effective, and brings into fact just what it expresses in metaphoric speech and sound. The incarnation is the centre of this pattern of divine speech and human and earthly hearing, God’s definitive verbal intervention in our broken and divided world. So our understanding and proclamation of the Word of God must not be weaker for understanding that it is more than scripture.

Luke uniquely provides not only this story of the angel’s annunciation to Mary, but the one which I quoted at the beginning, that juxtaposes the blessings of being Jesus’ physical kin or in particular parent, and that of hearing the Word of God and doing it. In context we must understand the greater blessing to include a reference to Mary as an example of just that. Her blessing is exactly that of being the first to hear the Word, and the most fulfilled in its doing.

Thus the Würzburg sculpture depicts the fact that Mary’s hearing of the Word is neither that conjuring trick with gametes nor merely the acceptance of a proposition, something external to her that is simply apprehended as fact, but is the creation and formation of a relationship. God says to Mary “let there be” and, with her assent, there is. To hear the Word of God and do it is not even just the translation of a good idea into practice, but it is to be created and recreated ourselves by hearing and receiving the creative word.

Let those who have ears to hear, hear.
Email Post